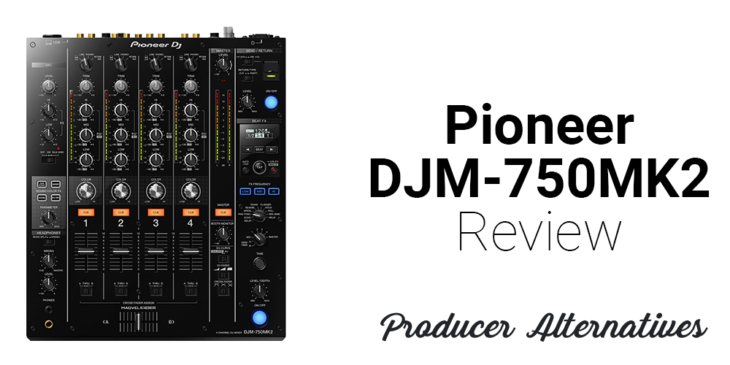 The DJM-750MK2 is a mid-range Pioneer mixer that’s compatible with Rekordbox DJ and Rekordbox DVS. It inherits most of the flagship features that you will find in Pioneer’s DJM-900NXS2. It’s in no way a budget mixer because of its hefty price tag. However, it’s almost half the price of the 900NXS2 and has similar capabilities, which is why the DJM-750MK2 is highly recommended.

Pioneer is known for revolutionizing the DJ industry with its exquisite high tech CDJ players who have evolved gracefully over the decades. However, Pioneer mixers don’t always receive the same level of credit as their CDJs do.

Unlike Pioneer CDJs, which ultimately beat the competition and are considered to be the ‘gold standard,’ Pioneer mixers occupy a market that is filled with outstanding products from competing brands.

Yet, hardcore enthusiasts will attest to the fact that pioneer mixers are of the highest standard. Pioneer mixers have rock-solid build and audio quality. They have all those famous effects you hear at clubs and festivals and now have digital capabilities allowing you to connect the mixer to your computer.

The four-channel DJM-750MK2 has all of the above qualities and will satisfy even the most demanding DJ enthusiast.

According to Pioneer, “the DJM-750MK2 is a four-channel mixer with club DNA”. This isn’t far from the truth as these mixers will be well suited for any bar or club because of the variety of features it has out of the box.

If you are one of those DJs that love to perform with effects in a live environment, then the DJM-750MK2 will work great in your setup. The four sound color effects allow you to add effects to each channel individually.

You can further manipulate these effects with knobs that are assigned to each channel. There is also a parameter knob that allows you to change the intensity of the effect.

Two send/return options, ¼ jack, and USB that allow you to connect the following:

There’s also an ON/OFF switch accompanied by a level knob that allows you to combine your effects with the send/return feature.

Some of the most noticeable effects features are located on the DJM-750MK2 effects channel, which is packed with effects features taken from the flagship DJM-900NXS2. You will be able to replicate the effects sounds that big-name DJs use on the main stage of festivals.

A handy feature here is the effects frequency buttons that allow you to add effects to just the high, mid, and low frequencies of a track (or a combination of those frequencies).

The FX frequency feature also allows you to perfectly layer effects from the effects channel over the sound color effects. The chances of you making a mess with your effect transition are lowered because you can just add effects to a single frequency.

Who is This Mixer For?

Purist DJs who still use classic turntables will love this mixer. Especially when adding modern world-class effects when playing old vinyl records, which are making a huge comeback. The option to use Rekordbox DVS software is an added bonus for those looking to control their digital music collection with turntables.

Most small club or bar owners want to have the best gear at their venues. A great sound system and DJ gear will only add to the quality of the club.

However, flagship DJ gear is expensive, even for club owners. There’s also a considerable risk of club DJ gear being damaged easily, especially if the club hosts a variety of DJs, which is why it makes sense to go with cheaper alternatives.

The DJM-750MK2 is still considered expensive for a mixer. However, it is a much more affordable option to its flagship brother, the DJM-900NXS2, which is why it might be better suited for most smaller venues. Especially if the owner of the venue is starting from scratch and has to invest in two CDJs as well.

The DJM-750MK2 is a bit more compact than the DJM-900NXS2, also making it a better option for mobile and bedroom DJs. Although, it is still heavy for a mobile DJ to take around to small gigs and is better suited for transporting to larger one-off gigs.

In other words, the DJM-750MK2 might not always be the best option for some weddings or a two-hour gig. Instead, reserve it for a night-long showcase at a birthday party or club.

Fully featured world-class four-channel mixer. The DJM-750MK2 is an outstanding mixer with almost all the bells and whistles of a flagship mixer. You wont feel the need to get the more expensive DJM-900NXS2 as this mixer has about 80% of the features that you will find on Pioneer’s flagship. It probably has more than enough features for the average consumer.

Great build quality. The mixer is heavy and solid, the way a premium mixer should feel. Even though the knobs and buttons are plastic, it still feels premium.

Superb out-of-box effects. You have three different ways of producing effects on this mixer, ranging from simple effects on a single channel to using elaborate effects hardware or apps on the send/return section. If you get bored with the standard effects, you can always connect an iPhone to it and use a compatible app to add more creativity to your mixes.

Expensive. Many can argue that the price is warranted, given the mixer’s quality and features. However, it is still a lot of money to pay for a mixer, especially if its for personal use.

There’s only one software option out of the box. It is possible to use the DJM-750MK2 with other DJ software like Serato and Traktor. However, it would be great to play on these platforms out of the box.

The DJM-750MK2 is a robust offering from Pioneer due to almost no shortcomings and its reliable build quality and features. Small club owners will be more than pleased with a mixer like the DJM-750MK2 because of its flagship features that are packed into a cheaper alternative to the DJM-900MK2. Bedroom DJs who have saved up enough money for an upgrade will also be more than pleased with this mixer. 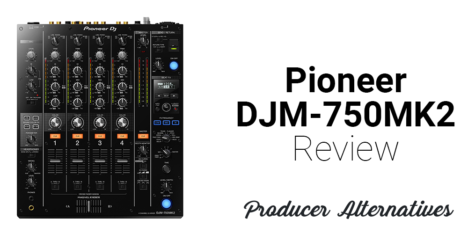