How to set up Studio Monitors 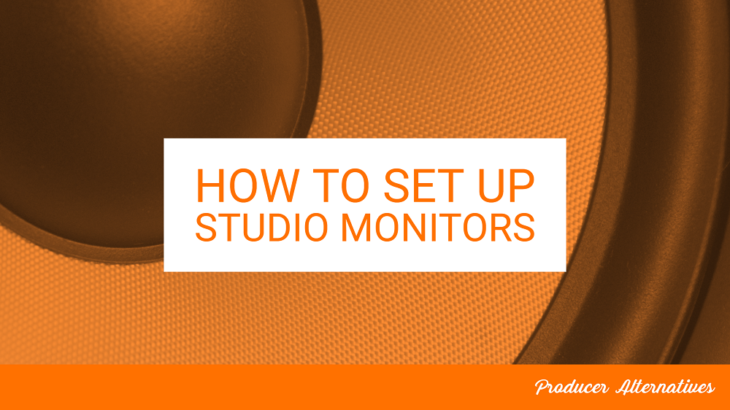 Nowadays, most of us are mixing and producing our music in makeshift studios at home. Whether that’s in a bedroom, a garage, or perhaps you’ve managed to take over a spare room in your house and you’ve given it the full studio treatment. Either way, the end quality of your music will be dependent on your monitor setup.

You can buy the best monitors on the market but your music can still sound lousy if you’ve not taken the time to consider how to position your monitors. Many people buy their monitors and position them with quick reference to a picture they’ve seen online, when in fact there is more of a science to it than just placing the monitor in front of you.

The frequency ranges can be hugely affected in a poor layout and this throws out any chance of you creating a well-balanced mix. So, to make things easier, we’ve broken down the theory of monitor placement into four separate areas which should help to give you better audio balance and more professional mixes overall.

Working Out The Angle

Symmetry is important when it comes to positioning your studio monitors and there are rules that you can follow if you wish to get the optimum sound from your setup.

The main idea that you should keep in mind is to create an equilateral triangle between yourself and the two monitors.

The main point is you, the listener, and then the other two points of the triangle are the two monitors which should be aimed back at the listener at 60º angles.

Try to keep the whole setup in the middle of the wall that you are facing with both monitors equal distances from the facing wall.

Monitors with rear-firing ports should be set slightly away from walls anyway but it’s good practice to leave a little bit of space for all monitor types, rear-firing or not.

Keep the 60º angles and everything else as symmetrical as possible.

You’re looking to create the cleanest sound path to travel from monitor to ear.

Unnecessary surfaces and objects in an unbalanced setup can create undesirable effects when mixing so try to keep things simple and clean.

Monitors should be set back from the facing wall, as mentioned in the Angle section above, but the distance from the side walls should be different. It’s a piece of information that is often missed out in monitor setup guides so make sure to follow this small but crucial detail.

A good middle ground for distance is 2-3 feet from the back wall so we’ll base the following example on that. So, if your left monitor is positioned 3 feet from the facing wall then make sure it is not 3 feet from the left side wall. Likewise, the setup should be the same for the right monitor. The distance from the side walls should be calculated so you’re monitors are still facing you at that 60º angle position. 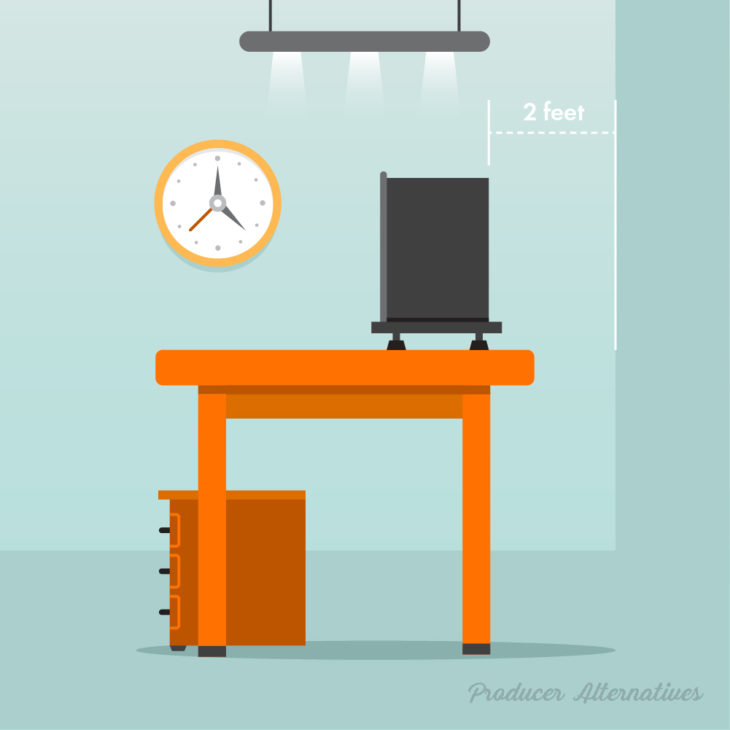 You might need to play around with the setup and try out different arrangements but you should be able to find a good balance eventually.

It might not seem like one of the most important aspects when considering your studio layout and sometimes you simply don’t have a choice because of doors, windows, and other furniture etc.

However, if you do have some freedom in where you can place your studio equipment then there are benefits to choosing the shortest wall in the room. In doing so, the reflected soundwaves from both of the longer side walls will arrive at your ears at the same time, providing that there are no sound obstacles in the way. This gives you a balanced listening position to mix your music and a better stereo image overall for your sound.

Keep in mind that doors and windows will create unwanted reflections so try to keep them away from your setup, if possible. For instance, a window just to the right of your monitors will alter the reflections on that side and create an imbalanced sound when mixing.

The audio interface is key for recording vocals and instruments but it also gives your setup advanced sound capabilities. While on-board sound cards in computers will do a basic job, you’ll get much better sound quality and control by connecting your monitors to the audio interface.

Knowing how to configure the monitors and interface is key to finding the best signal to noise level and in doing so, will also give you greater control over the monitors overall gain levels. Here’s a quick rundown of how to get the most out of your monitor and audio interface setup:

Setting up a balanced and optimized monitor layout is one of the key stages in a studio setup.

You could have all of the music production skills in the world and still be let down by a poor monitor setup.

It takes time to find the right monitor positions and it might also mean moving things around but it will be worth it in the end. A quick test is to play some professional music that you know sounds great through many systems and see if sounds the same through your setup. If it does, great, you’ve mastered your studio layout. If it doesn’t sound right then you’ve got some work to do. +

Moving monitors away from the wall can reduce bass levels and you can always tweak the frequency levels on the monitors themselves if they are available.

You’re looking to find the right balance so that your monitor output is similar to those systems that are used outside of the studio.

You want your mixes to translate into the real world and only by fine-tuning the position of your monitors and optimizing your studio layout will you start to create your best music possible.

View all posts by Producer Alternatives