At Producer Alternatives, we adhere to strict standards of editorial integrity to help you make decisions with confidence. We earn money from some of the links of the products we feature, but rankings and reviews are never a affected. Here’s how we make money. 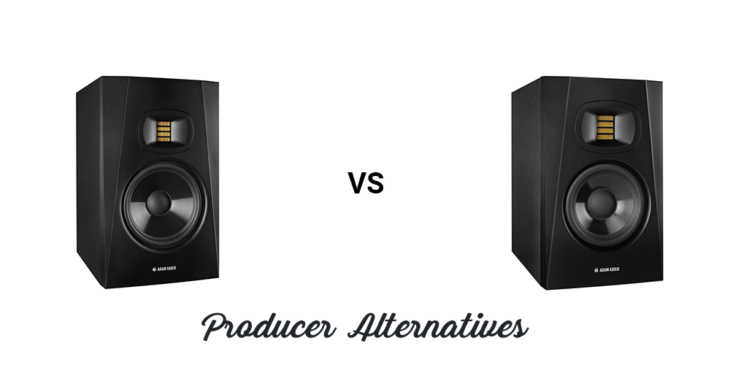 The ADAM T-Series has a strong following thanks to their premium features and amazing value for money. The overall design of the T5V and the T7V are quite similar which makes deciding between the two a difficult choice, so this in-depth review should help to bring you some answers.

Both studio monitors are small enough to fit in compact music production spaces and there isn’t much difference in price, so it really comes down to the style of music you mix and master the most. Let’s take a closer look and break down the two monitors in more detail:

Looking at these two monitors, there is not a huge difference in the design specification apart from the main talking points of the woofer size and bass response. The first obvious point to make is that the T5V is 2” shorter at only 11.7” compared to the 13.7” height of the T7V.

The T7V is designed with a 7” woofer and 1.9” tweeter whereas the T5V comes with the 5” woofer and same 1.9” tweeter. It’s in this 2” difference that we get the wider frequency response in the T7V monitor, although not a huge difference in size, the bass potential is noticeable.

The 39Hz from the 7” woofer gives you more in the lower end than the T5Vs 45Hz. This is worth taking into consideration if you’re looking to mix and produce bass-heavy music. Also, due to the larger size, the T7V will suit the larger spaces and give you a better mix overall.

The ADAM Audio T5V monitor is the smallest in the T-Series range but that should not deter you, this 5” monitor packs a punch for its size and it’s more than worth the price tag. In fact, the design spec is quite remarkable considering this is ADAM’s budget-range option.

The TV5 is a 2-way active studio monitor that offers an impressive 45Hz bass extension from its 5” polypropylene driver. On the other end of the spectrum, you’ve got soaring highs that reach up to 25kHz with the help of the unique U-ART ribbon tweeter – the TV5 impresses yet again.

The 50W woofer and 20W tweeter are more than enough for home studios. In addition, the HPS waveguide from the S-series has been used which not only brings a premium feature but also an exceptional sweet spot that is unheard of in budget studio monitors – up until now!

The ADAM TV5 now tops many of the current budget studio monitor lists due to its pure frequency range and extended sweet spot. We usually have to make a compromise when using low-end monitors but we struggle to find any issues at all with the ADAMS T5V.

Pros of the ADAM T5V

The ADAM Audio T7V is the most popular model of the ADAM T-Series because of its overall flexibility and frequency response. Along with all of the high-end design that we have come to expect from ADAM monitors, the cost of the T7V is what excites us the most coming in at just under $250.

The bass capabilities of the T7V extends down to an impressive 39Hz and the unique ADAM U-ART tweeter gives you highs of up to 25kHz. You’ll struggle to find a better budget studio monitor with this kind of frequency range, sound precision, and professional build quality.

The S-Series HFP premium waveguide is built-in, the DSP-controlled equalization and analog input connections are all housed on the sturdy metal backplate, which the rear-firing bass port sits neatly at the top of. The T7V is not feature-heavy but it does the basics to perfection.

If you’re working in small control rooms or you’ve got a home studio setup then you really should be taking a closer look at the T-Series from ADAM. The T7Vs, in particular, give you that perfect combination of a broad range of frequencies and excellent value for money.

Pros of the ADAM T7V

The T5Vs are the main ‘budget’ monitor in the budget T-Series range from ADAM but we struggle to find anything budget about them. The premium features borrowed from the ADAM’s own S-Series range and the high-precision sound quality puts the T5V well beyond some of its budget rivals. The same goes for the T7V, the premium features and extended bass response helps this ADAM model to shine through in this competitive budget studio monitor market we see today.

Sitting side by side, the T7V is the more mature version with its bigger woofer and larger frame. The low end is just right for bass-heavy music and even though we’re talking budget range, your ears will not be destroyed after a long session at high volumes. It’s this attention to quality that impresses us the most about the ADAM T-Series. It doesn’t come with any fancy LCD displays and EQ graphs but that doesn’t matter. What counts is the quality of sound and the components of the T5V and the T7V have been designed and built to give you a smooth and rounded audio performance, perfect for creating professional music. Many budget monitors struggle with either the highs or lows, or give you a muddy middle, but ADAM monitors seem to be able to give you detail throughout, especially in the mid-range which many budget monitors simply can’t offer.

You’ll notice that there is around a $50 difference between the two monitors and that obviously rises to $100 when you buy a pair, so if you’re looking to keep the cost down then a pair of T5Vs in a small room, treated or untreated, will be absolutely fine. But for that $100 extra, you can get more freedom with the T7Vs and as we always say…monitors can make or break your music. Choose carefully and if you have the money then don’t cut corners. Your music will thank you in the long run! 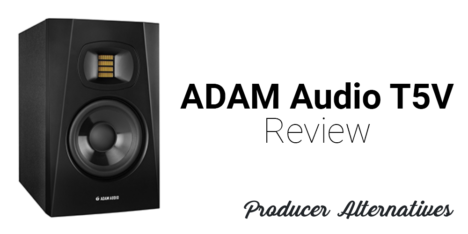 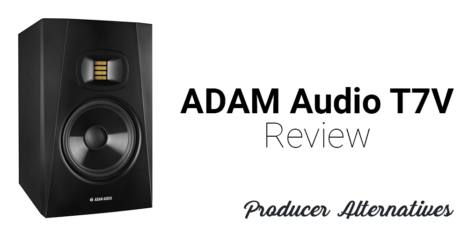